Friday 15 May 1998 was the date of the world premiere of Fear and Loathing at Las Vegas at the Cannes film festival. On that day, Terry Gilliam, Johnny Depp, Benicio Del Toro, and producers Laila Nabulsi and Patrick Cassavetti gave a press conference at Cannes. The highlights are below:

Johnny Depp was asked about his first encounter with Hunter S. Thompson. “My first meeting was Hunter was a pretty interesting one. I was up in Aspen around the Christmas of ’95 with my girl and wanted to see snow. We were in this bar called the Woody Creek Tavern and this friend of ours said, Oh, I’ve just spoken to Hunter. He’s on his way down. And I said, Oh great! I finally get to meet Hunter Thompson. One of my all time heroes! About 10 minutes later, the front door burst open and there was this hulking brute standing there wielding… In one hand he had a stun gun, an electrified stun gun. In the other hand, he had a 3′ cattle prod which was fully electrified, sending all kinds of currents through it. Blue lightening all over. He was swinging it around and people were jumping out of the way running for cover.

“He came over and sat down. He hit me on the head with the cattle prod and we had a couple of drinks. Within an hour and a half, we were at his house which is not far away from there, and we built a bomb in his kitchen. I gingerly took it outside and I fired at it with a 12 gauge shotgun. There was about an 80′ fireball. It was a dramatic explosion. And that was my first meeting with Hunter Thompson. And it doesn’t change. It’s still the same.

“I was blessed enough, or cursed enough, to spend a good 3 or 4 months with Hunter Thompson prior to filming. So he was just a wealth of information. He was an incredible source of information. He was generous with his time and his private life. He even let me move into his basement. Become a termite. It was due to Hunter’s generosity allowing me to absorb just watching him as I could…. I was living in the basement 5 days, 6 days… You know, I have a tendency to smoke cigarettes. It wasn’t until 5 or 6 days passed that I discovered he had a keg of gunpowder about 5 feet away from me. So I stopped smoking in the basement after that.

“Clearly, I spent way too much time with Hunter. It has gone too deep. It really has. Hunter is an incredible animal. He really is something to watch because on one hand, he’s this great Southern gentleman – very sensitive, very caring, very sharp. He’s the great observer. His thoughts and his emotions manifest into these physical movements. You can see him thinking his movements. You can see the wheels spinning in his head. And he’s an incredible case study. So I admire him. I was lucky to spend as much time.”

Depp also commented about having to shave his head for the movie: “I believe the decision to shave my head, you know, and keep this little horseshoe of fuzz around the edge was… I knew I was going to have to do that right away as soon as we started to dive in. Benicio and I, in one of our early meetings, we sort of looked at each other and said, “Here we go… ” Benicio was going to start eating a lot of pizza and pasta and potatoes and all that stuff. I was just going to shave the top of my skull. I looked ridiculous. I mean, I looked very strange. It was important for me to absorb as much of Hunter as I possibly could. Physically. And become him, if that was at all possible.” And Gilliam added, “As a filmmaker, it’s very important for me to get young, really good looking sexy guys and make them look like shit. Benicio’s belly – it was created by a whole team of special effects operators. Benny had about 30 tubes running down his back. That belly was not him. He�s the great Puerto Rican Buddha.”

Gilliam then explained the appeal of the book: “I think the book is astonishingly funny. It’s about serious people being driven to excess. It’s about the times in society, and I think it has wonderful hallucinatory moments. It combines most of my interest. I often find it funny that people are surprised by this because I thought I’ve been warning people for a long time that I’m capable of this kind of stuff.

“For me, it was a very simple and direct expression about the way I felt about things without any desire or need to apologise or soften, because the book doesn’t do it. The main thing was for me to try and capture the book on film which is the thing people said was impossible. It’s odd to say, but I wasn’t really thinking about what kind of film it was. The goal was to try and be true to that book and get it up there honestly without any apologies, because we seem to live in a world where there is nothing but apologies. People do not want to get into serious conflict that we’re not ready for yet. So that was me. I think the anger of it, the frustration of it, the despair of it, the nostalgic in it, the madness in it, it’s all things I have to live with any time I go home. So I need to stay away from home a bit. That’s no criticism of my wife or children. This is me.”

Gilliam then spoke about the problems encountered in realising the movie: “First of all, I don’t understand most of the drugs described. When we started, we tried to do it. With the director of photography and the cameraman, we talked about different ways of doing it. We talked about different filters and speeds of film. We also talked to people who’ve had direct firsthand experience. And then in a sense, we kind of threw it all out. We did a lot of research and worked in very instinctive ways. In a sense, I wasn’t overly interested in a specific drug condition. It was more the idea that the world had gone crazy in trying to interpret the inherent experience of these people. Paranoia, fear, madness, driving themselves through these things. I know it wasn’t done in a specific way. However, it was very true to a lot of drug experiences. And that intrigued me, because obviously we touched on some kind of truth and honesty about the whole thing.

“This is the problem with films now: everybody is making it for a specific group rather than make a film for itself. You don’t write a book for a specific audience. You write a book because you have something to say and you believe it. That’s how we made this film. I find it quite extraordinary that everybody wants to know about who it’s for. To me, the point of making this film is to find how many people are out there as will respond to it. It touches a nerve. You make films, I feel, most of the time by sitting out in this dark sea at night with no moon and you don’t know who or what is out there, and then you send up a flare with a movie like this. You just see all sorts of people out there. There’s also a lot of gunboats out there. There are any number of things out there. Until you try, you don’t know.

“And I think we’re living in a time when it’s all so very carefully orchestrated. Committees get together, marketing people get together and find what works and what doesn’t. And I find that it’s absolute death to the cinema and you’ve got a big lizard marching this way which I find is the absolute in corporate thinking. You’ve got ads that look like spearmint mouthwash. You’re not selling any kind of product. We’re interested in quantity, not quality. How long is this thing? How big is this thing? Not, how good is this thing ? We’re living in a terrible time. I think it’s the saddest thing about the Cannes Film Festival this year. We’re ending with the ultimate corporate movie. It could be a wonderful movie, but I think we could do better than that. (Pause) It’s probably great and I apologize for everything I’ve said.”

Leila Nabulsi chipped in: “Actually, Terry said everything that I would have said. I have been trying to make this movie for ten years. I never thought about who was it for and who the audience was. I just thought about that it would make a great movie and I wanted everybody to see it. I know that it’s probably not everybody’s cup of tea, but I don’t really care about that. Love it or hate it, that’s fine. Indifference – and/or deference – is the thing I wouldn’t want. When we did the test screening, the focus group said something funny. The question was, Who might see this movie? And they said Smart people, old hippies, college kids and surfers. So, maybe we’ve got a chance.”

Gilliam was uncompromising about the subject of drugs: “Number One, Fear and Loathing is not a pro-drug film. Anybody who sees this film isn’t going to rush out and start to do drugs. This is showing both good and bad, but it keeps on pushing. The problem is there is such hypocrisy about drugs in what we decide is a good drug and a bad drug. If you say drugs , everybody draws a sigh of horror. As a world now, we’re totally dependant on drugs. Everybody sits there and takes drugs in one form or another. I drink very strong coffee. It was a very dangerous drug in the 17th century, and it’s pretty dangerous now. And there’s a difference in the kind of drugs we seem to consume now. What is acceptable now is things like Prozac and Ritalin, which are suppressive drugs.

“But the drugs of the 60’s and 70’s were expansive drugs. For better or for worse, yes, they’re dangerous. I think it’s dangerous in excess. Climbing a mountain is dangerous. Driving a car is dangerous. Danger is with us, and we see it. We’re so concerned about living forever that instead of danger, we’re avoiding life. And I find that all that’s happening now is we have this nice suppressing drug to keep us content, quiet and good shoppers. It’s very important for a healthy economy: good shoppers. So I hope no one stops taking drugs because it might stop them from the Gap or The Body Shop or any of those fine corporations that provide us with fine, wonderful things. That would be a terrible thing.

“Anyway, I think it’s nonsense the way people talk about drugs. People have to talk about drugs openly, good and bad. Like everything, there is good and bad. It depends on how you use it. These two characters in the film push themselves to the limit. They’re pushing themselves. They’re testing themselves. Testing each other. Testing the world around them. And that’s not necessarily a bad thing. It’s a painful thing, but not necessarily a bad thing. It’s better to be questioning, arguing, struggling than just taking it and sitting quietly. That’s an old hippie speak. But I was never a young hippie.”

The full transcript of the Fear and Loathing press conference can be found at: http://www.filmscouts.com/intervws/fea-loa.xad 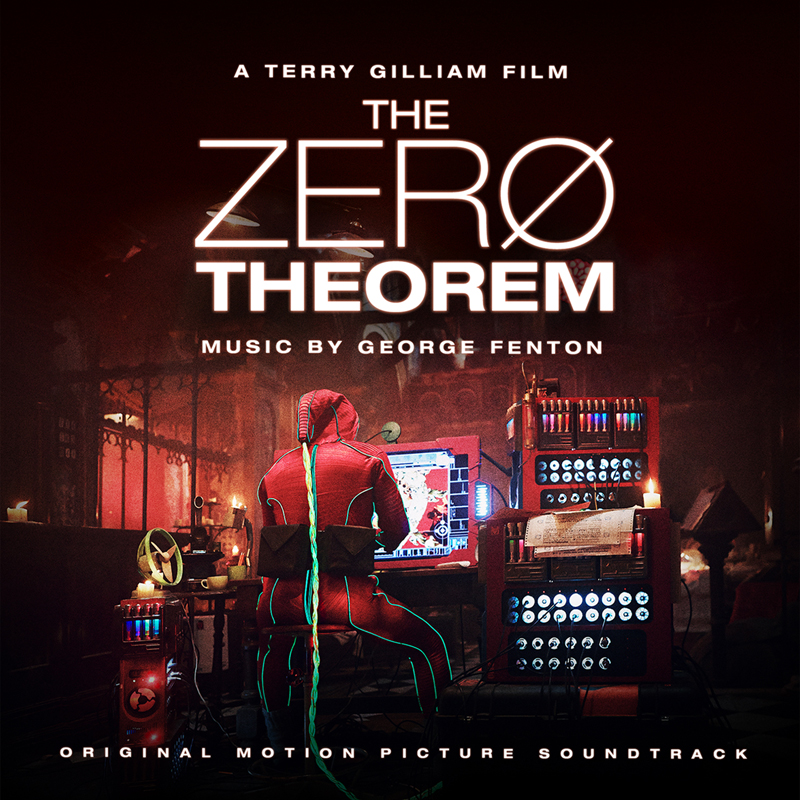 The Truth of the Picture: Scoring The Zero Theorem 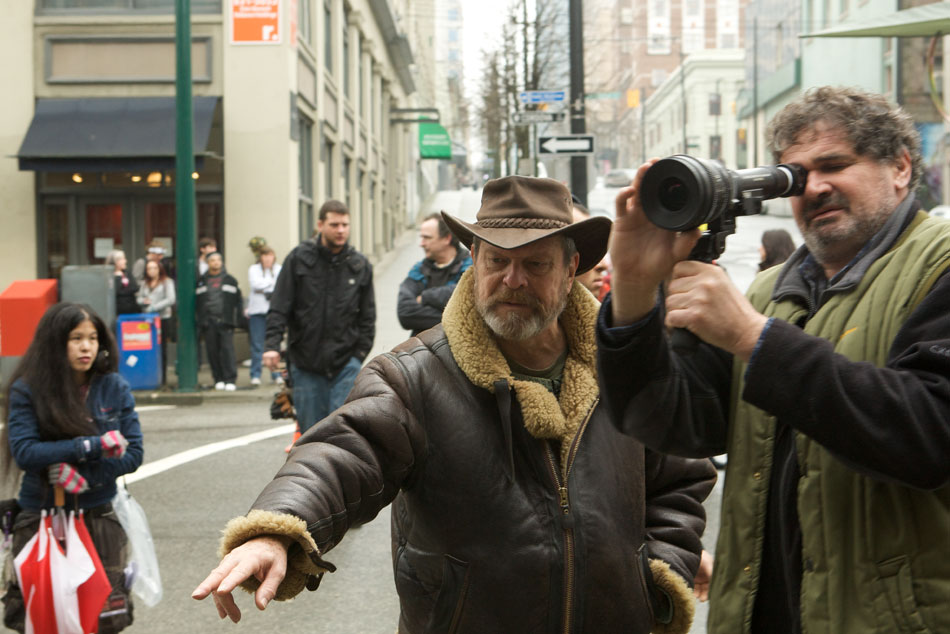