Bruce Willis called Terry Gilliam at the end of November 1999 and asked him what was happening to The Defective Detective, renewing his interest in doing the movie – Willis having been linked to the project immediately after 12 Monkeys. We’ll have to see over forthcoming months what comes of this, yet at the moment, it is just another chapter in the unfinished story of Gilliam’s thwarted attempts to get The Defective Detective onto celluloid.

First reported eight years ago in 1991, Terry Gilliam has desired to direct a very personal project, The Defective Detective. A burnt-out cop investigates a missing child and is drawn within an absurd fantasy world of floating trees, a knight on horseback, and (of course) massive filing cabinets.

“The script started from me going into my files, my drawers and digging out all the bits I’d cut out of Brazil and Munchausen and everything else I’d ever done… like Fanny and Alexander was kind of a compendium of all the best of Bergman. That’s the idea on this one,” Gilliam told Dreams at the end of 1997.

Upon completion of The Fisher King in 1991, Gilliam was developing several projects, including Philip K. Dick’s A Scanner Darkly (with Fisher King writer Richard LaGravenese), and Mark Twain’s A Connecticut Yankee in King Arthur’s Court. However, neither of these projects got off the ground and Gilliam set to work on The Defective Detective, again co-writing with LaGravenese. On June 10 1993, while working on The Defective Detective, Gilliam recorded a diary of the day for the British Film Institute…

“For the last seven months I have been writing and preparing a film called The Defective Detective. The whole process is slow and frustrating and has been turning me more and more into a hermit… and a crab. It has been almost three years since I have been behind a camera. I’m not happy and I leave the house less and less. My contact with the outside world is primarily via the telephone and the fax. Richard LaGravanese, my co-writer, is in New York. Margery Simkin, my co-producer, is in Los Angeles. […]

“However, this morning as I climb the stairs to start my ritual of making cups of cappuccino and staring at bits of paper, Jonathan Pryce drops in for a chat. Fresh from a series of successful commercials and talk shows in the US of A, he is trying to decide between two conflicting film offers – on the one hand, an offer to play the villain in a big budget Hollywood film, on the other, a part in a smallish three-hander alongside Judy Davis and River Phoenix [this film, Dark Blood, was abandoned in November 1993 after the death of Phoenix]. So the choice is once again the old favourite… do you go for the money and exposure or go for the more interesting and challenging… a chance to work with great artists – letting the quality of the work dictate your career rather than having your career dictate the quality of the work. `Stick to art’, say I. […]

“With the bulk of the morning now gone and no work done on the script, I attack the telephone. First call: Joyce Herlihy re: preparing a budget for The Defective Detective. Next I get my wife, Maggie, to run down to ProntoPrint to make more copies of the script so that they can be sent to Joyce and the accountant.

“[…] I pick up a book at random: Barcelona, by Robert Hughes. The first page I turn to is about Catalan ironsmiths. Suddenly I’m back in the world of Vulcan, a world I thought I had spent sufficient time in during The Adventures of Baron Munchausen. These chance meetings always amaze me. They are invariably a result of the mess that surrounds me in my studio. I am always bumping into information that can be useful in jolting me out of whatever creative block I currently find myself trapped in… or providing me with surprising new paths down which I can ramble to avoid the task at hand. I use these occasional moments of serendipity as justification for my innate sloppiness.

“[After lunch] I turn my attention to a script called Bayswater that has been sent to me with the hope that I might direct it in the autumn. Although it’s nicely written, it doesn’t manage to excite me, so I call the producer, Brian Eastman, and talk myself out of another chance to make a film.

“10pm: At last the world is dark and still, the pigeons [on my roof], the house, and all in it are asleep. I can finally concentrate on drawing my storyboards. The sequence I am working on involves complicated special effects and needs to be laid out in careful detail. With each stroke of the pen the film begins to come alive… a flying bed transports the detective and a mysterious boy into a child’s glorious fantasy world. I don’t refer to the script. I just let the pictures come. The characters begin to breathe… the world becomes real. The bed soars over a mountainous castle and dives down to a mirror sea. The sunset glows amber as they sweep along their reflection in the still surface of the sea and begin to climb towards the colossal tree in the clouds…”

In 1993, Gilliam had met with several studios to gain funding to develop The Defective Detective further, and Paramount agreed. Throughout 1993, however, Gilliam was “begging, grovelling, humiliating myself” to get the movie greenlighted. The problem was that at the time Gilliam wanted $25 million, yet Paramount chiefs didn’t believe he could make it for that.

By the end of 1993, Gilliam was getting desperate that he had not actually managed to get to the point of directing any of the projects he had begun, and spoke to Empire Magazine about his plight.

“I’d like to get a couple more films done before I die”, he said. “The joke is that I did The Fisher King with an eye to suddenly changing my rhythm and trying to make films quicker md more often. Fisher King lured me out to Hollywood, the film was successful, so I let my guard down. I thought, ‘Now I’ve proved to them I can work here, they trust me, and we’ll be able to get another off very quickly.’ It hasn’t worked out that way at all.”

“Hollywood moves at a very slow place,” said Gilliam. “I find the whole process debilitating. You waste so much of your time trying to justify what you’re doing to people who just don’t get it, and all I want to do is just go do it. I’ve spent the last couple of years spinning wheels. At this rate, I’ll never do a film again in my whole life…”

Talking to Ian Christie several years later, Gilliam said, “We thought we’d got it to the point where it could be made; we had Nick Nolte and Danny de Vito lined up, we’d got the budget down, we had meetings, and it seemed to be yes – then nothing. Once again, I found myself in the middle of the sale of a studio. Viacom were trying to buy Paramount and all their energies were being focussed on that.”

Gilliam, frustrated, put The Defective Detective to one side in 1994 and started to work on A Tale of Two Cities, a vehicle for Mel Gibson, but the project collapsed when Gibson pulled out in favour of Braveheart. In Summer 1994, Gilliam then turned to the 12 Monkeys script which he had been offered, and agreed to direct it for Universal, which kept him busy until it was completed and released at Christmas 1995. 12 Monkeys was a box office success around the world, and Gilliam believed that it would be a great help in getting the green light for The Defective Detective. Gilliam started to work again on it in early 1996, and told Empire magazine in April of that year, “I’m trying to resuscitate it on the coattails of this little success with 12 Monkeys.”

But by March 1997, there had been no progress, and Gilliam was becoming increasingly bitter. He told Neon magazine, “Nicolas Cage is down to play the lead, but the studio says, ‘What’s the genre?’ It’s the same fucking Terry Gilliam movie, but stretched bigger and brasher, and so they panic. 12 Monkeys made $165 million, but Hollywood is about perception, not reality, and I’m perceived as the rebel, the troublemaker. I’ll wait the bastards out, but if I can’t do this one, with Nic and my last success, I will walk away from Hollywood. I’ve spent too long trying to deal with this place.”

One month later, Rhino Films fell out with Alex Cox during the pre-production of Fear and Loathing in Las Vegas. The project lost its director, and Rhino contacted Gilliam to see if he wanted to direct the movie – Gilliam said yes. At the time, Gilliam was planning to start The Defective Detective immediately after Fear and Loathing.

During the postproduction of Fear and Loathing, Gilliam was still unable to get the project off the ground in the manner he wanted. At this time however, Gilliam started to doubt his drive to make the movie. “In a strange way, I don’t think I should still be trying to do The Defective Detective, because I’ve already done it: it’s like trying to get Munchausen right. Or perhaps it’s a compendium of everything I’ve ever tried to do on a large scale, so that I can finally get the epic stuff out of my system and go back to doing smaller, more delicate pictures.”

Anyone who has read the script of The Defective Detective knows that this is a movie that just HAS to be made. Hopefully Bruce Willis will get behind the project and use his box-office power to secure the green light.

In the storyboards below, several of The Defective Detective‘s characters are trying to escape from Mr Bigg’s henchmen on horseback. They are transported to a safer looking world by jumping through a poster… 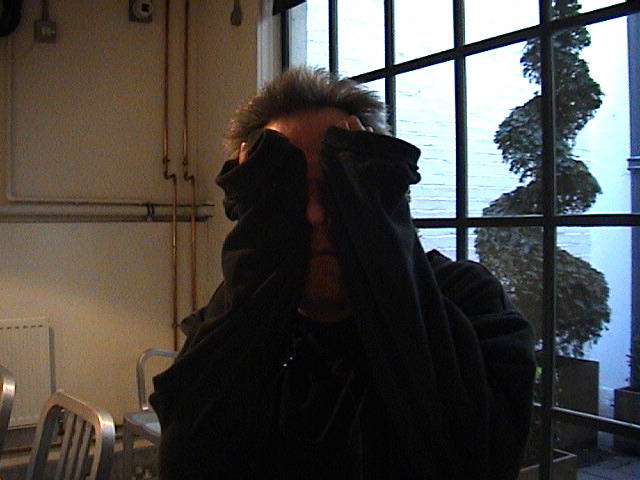 Loves Macs but hates Marmite. Just who does TERRY GILLIAM think he is?  Sycophantic puppeteer Chris Pirie went to find out. This article – 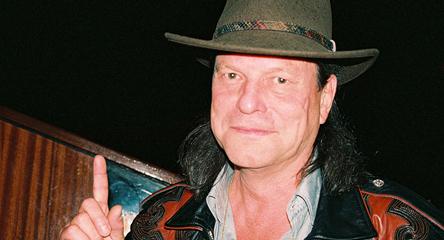 Phil Stubbs delves into the initial development, writing and financing of The Man Who Killed Don Quixote 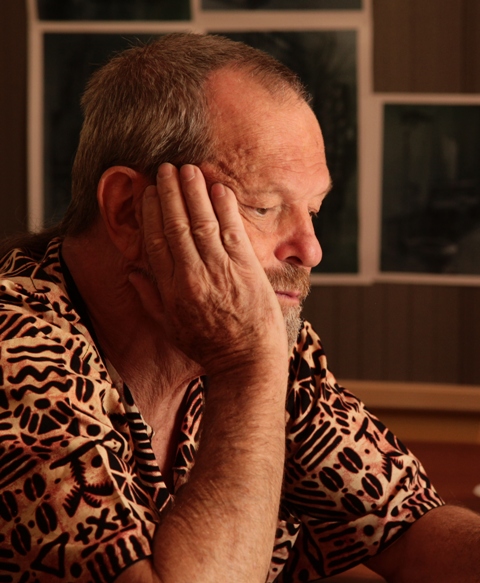 Terry Gilliam discusses his new picture The Zero Theorem in depth, with Phil Stubbs MARCH 2014 – This is the third interview with Terry Gilliam